Perpetuum mobile as a commission for Bad Karlshafen 2017

The order stagings are related to the specific environment. Reality can be perceived and reassessed from another perspective. This is also the case in the latest production, which is commissioned by the city of Bad Karlshafen GmbH in cooperation with the Kultursommer Nordhessen: Landgraf Carl, the founder of today’s Bad Karlshafen, was inter alia interested in natural sciences and, above all, in mechanics. In 1716 he called Johann Bessler to his court, which developed a wheel that, once started, should run incessantly. Bessler built several designs of his invention. They were inspected and successfully tested over several weeks – he could never prove a fraud. Nevertheless, the voices of skeptics and jealousies never stopped! In the end, he destroyed his invention himself – for fear they could steal him.

Sponsored by Landgrave Carl, he lived in Bad Karlshafen. There he is said to have researched until his death on Perpetuum mobile and other apparatus. His house is still located right next to the town hall at the harbor basin, which is currently being refurbished for shipping from the Weser. The rest is fantasy …

At six venues old and new stories of the peretuum mobile are interwoven. The futurist Paul Scheerbart visualizes his “world of the perpeh” by means of a crazy projection apparatus on the walls. A lecture performance that combines a virtuoso game of light and shadow and conjures up the madness of a machine that is spinning faster and faster. In an impressive experiment, visitors can admire the so-called “butterfly effect”. Ten books of different sizes are placed one behind the other. And when, in the end, a tiny book about a chain reaction overturns a nearly 2m book, the madness is palpable. In front of a big cross, “Ms. Mehr” muses on a world without God. She celebrates the multi-machine “Perpetuum mobile”. Printers are constantly duplicating share certificates of this new invention, which raises the key question: Do not we all want a little bit more?

The accompanying exhibition PERPETUUM MOBILE was shown from May to October 2017 in Bad Karlshafen. 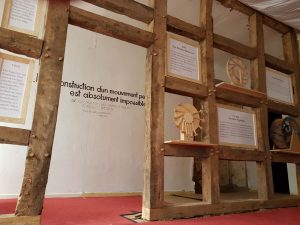 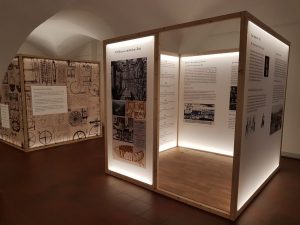 The poetic worlds of the Berlin-based theatre ANU have impressed the “Kultursommer Nordhessen” (cultural summer of Northern Hesse) with productions such as SCHATTENWALD, OVIDS DREAM, THE GREAT JOURNEY, SHEHERAZADE or NACHTMEERFAHRT. With its sensuous stagings, the ensemble opens up spaces of experience and experience into which visitors can immerse themselves and be enchanted, even transformed.