PERPETUUM in ZOOM  –  city without hardship

Everything is about the question : How do we want to life together as a society in the upcoming future?

A new city is about to be built: ORFFYREUS STADT, named by the inventor of the first Perpetuum-mobile, who claimed to solve all human problems by the everlasting source of energy, the “eternal- wheel”. He called this utopia a city without hardship. A place meant to be a haven of all modern threats. Wheather its about physical health, mental health or ones financial situaltion, there will be no danger to the citizens of Orffyreus Stadt any longer.
The first step towards the future has been done. There will be a contest to find out who is worth it to be the first resident of the city without hardship soon.

The concept
The “candidates” (audience) get split up into small groups, fighting together to become the first residents of “Utopia PERPETUUM”.
Therfore we use greenscreen technologie to create a analog looking virtual space. Using images of your city as part of the plot is an important part of the idea:

technology: “ZOOM” (video conference platform)
ANU relocates its poetic work into the world wide web. Therefore we use the video conference tool “Zoom” as a virtual space. Many of you might be familiar with zoom already due to the home-office-situation of the past months. Theater ANU now  teases out the hidden creativity potential of zoom. We use video sequences, direct interaction with the audience as well as virtuell effects to create an atmospheric of a live experience even in times of physical dinstance.

backround
PERPETUUM – city without hardship was produces in 20218 as a site spezific commissioned production for Bad Karlshafe, a baroque planned german city. In 2019 some changes in the staging were made and now it was possible to performe PERPETUUM in every city. From 2020 on we  take the next step and work on a  PERPETUUM online show. 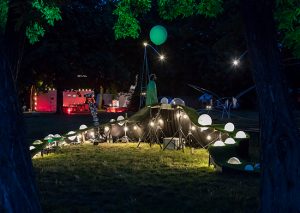 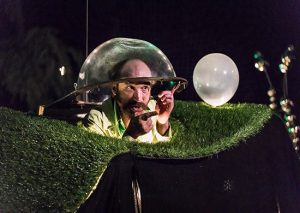